New Movies to Watch in Theatres on Halloween

Halloween is one of the greatest seasons for movies, and even in the very unusual year of 2020 we have great new movies to scream about on Halloween. In addition to new movies like COME PLAY and SYNCHRONIC, we are showcasing a variety of horror classics — from family titles to serious shockers — as part of our Fright Nights series.

Here are all the movies to watch in theatres on Halloween weekend 2020!

After a group of teens mysteriously disappear from a small Midwestern town, locals believe it is the work of an urban legend known as The Empty Man. As a retired cop investigates and struggles to make sense of the stories, he discovers a secretive group and their attempts to summon a horrific, mystical entity. Soon his life—and the lives of those close to him—are in grave danger. Directed by David Prior from a screen story and screenplay by David Prior based on the graphic novel by Cullen Bunn, THE EMPTY MAN stars James Badge Dale, Marin Ireland, Stephen Root, Ron Canada, Robert Aramayo, Joel Courtney and Sasha Frolova.

In SYNCHRONIC, when New Orleans paramedics and longtime best friends Steve (Anthony Mackie) and Dennis (Jamie Dornan) are called to a series of bizarre, gruesome accidents, they chalk them up to the mysterious new party drug found at the scene. But after Dennis’s oldest daughter suddenly disappears, Steve stumbles upon a terrifying truth about the supposed psychedelic that will challenge everything he knows about reality—and the flow of time itself.

A fan-favorite manga adaptation is back in theatres! Set several centuries in the future, ALITA: BATTLE ANGEL centers on Alita, found abandoned in the scrapyard of Iron City by Ido, a compassionate cyber-doctor who takes the unconscious cyborg Alita to his clinic. When Alita awakens, she has no memory of who she is, nor does she have any recognition of the world she finds herself in. As Alita learns to navigate her new life and the treacherous streets of Iron City, Ido tries to shield her from her mysterious past.

Newcomer Azhy Robertson stars in COME PLAY as Oliver, a lonely young boy who feels different from everyone else.  Desperate for a friend, he seeks solace and refuge in his ever-present cell phone and tablet.  When a mysterious creature uses Oliver’s devices against him to break into our world, Oliver’s parents (Gillian Jacobs and John Gallagher Jr.) must fight to save their son from the monster beyond the screen.

It’s been 50 years since the Apollo 13 mission, and 25 years since the premiere of the stunning dramatic rendition that brought the historic flight and its crew to life for a new generation. Nominated for nine Academy Awards, including Best Picture, the real-life space flight that gripped the nation and changed the world is returning to theatres for a special in-theatre event in honor of the anniversary of both the movie and the mission. This event features exclusive bonus content, join your friends and family, young and old for an Apollo 13 experience that only the big screen can deliver! 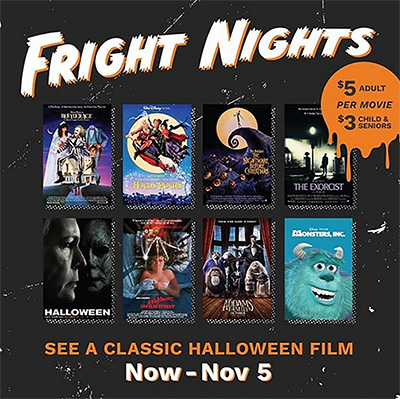 Depending on your location, there are several other great Halloween movie choices playing at Cinemark! Films like THE EXORCIST, SCREAM, A NIGHTMARE ON ELM STREET and other favorites are showing in many theatres as part of Cinemark Fright Nights! Check your local listings to see which titles are playing over Halloween weekend.

Want to learn more about movies coming to Cinemark?