The Rambo movies have defined American action movie culture since before the sort of action movies we know now even really existed. Beginning with FIRST BLOOD in 1982, Sylvester Stallone's Rambo character has evolved from a tormented veteran suffering PTSD into to a heavily-muscled avenger of America's wartime losses, and finally into a monster with ferocious killing instincts which supersede even his own humanity.

Now, in RAMBO: LAST BLOOD, opening on September 20, Stallone brings the character back to the big screen. In one way, the movie picks up right where 2008's RAMBO left off: With the hero living on a ranch in Arizona, seemingly at peace for the first time in his life. But, like all the movies in the Rambo series, the new episode is likely to push the character to a new place. To see where he might go, let's take a look back at how the Rambo movies have influenced and even defined action movie culture.


Looking at it now, FIRST BLOOD is a pretty remarkable movie. Just as Stallone's other early hit, ROCKY, was more of a low-key drama then an amped-up sports movie, FIRST BLOOD is a small film. John Rambo is a soldier who has returned from the war in Vietnam to discover he no longer really has a place in America. All he wants is to have a quiet lunch and be on his way, but a small-town sheriff in the Pacific Northwest won't leave him be — and so begins a cinematic rampage that has continued for almost four decades.

FIRST BLOOD is an action movie in the mold of BULLITT, DIRTY HARRY and THE GREAT ESCAPE. It is fanciful, but not over the top. Despite being a product of the '80s, all the excess we associate with action movies of the era was just beginning to build. But FIRST BLOOD started the ball rolling, in many ways. Once unleashed, Stallone's John Rambo isn't just a soldier; he's a super-soldier, capable of winning a guerilla war against a larger and more heavily armored force. The character suffers negative effects of war, but even in FIRST BLOOD, John Rambo was a new and more exaggerated action hero than we had seen before.


Three years later, the character returned in 1985's RAMBO: FIRST BLOOD PART II. '80s action heroes weren't quite established; Arnold Schwarzenegger's career was just getting started via CONAN THE BARBARIAN and THE TERMINATOR. Stripped to the waist, with a curly mullet, red headband and bulging biceps, Stallone defined the 1980s action hero icon. Rambo is a special forces tornado, able to carry an M60 machine guns in one arm, and with the know-how to put explosive arrowheads to their most spectacular use.

FIRST BLOOD PART II and RAMBO III are revisionist fantasies in which John Rambo got to fight and win wars that the United States could not. He went to Vietnam in search of lost prisoners of war, and to fight Soviet forces in Afghanistan. In both sequels he wages his own version of the Cold War — the Soviets are lurking in FIRST BLOOD PART II as well — and both turn the FIRST BLOOD template into stories in which a lone wolf hero can fight and win battles that real armies could not. That's basically the '80s action movie in a nutshell. 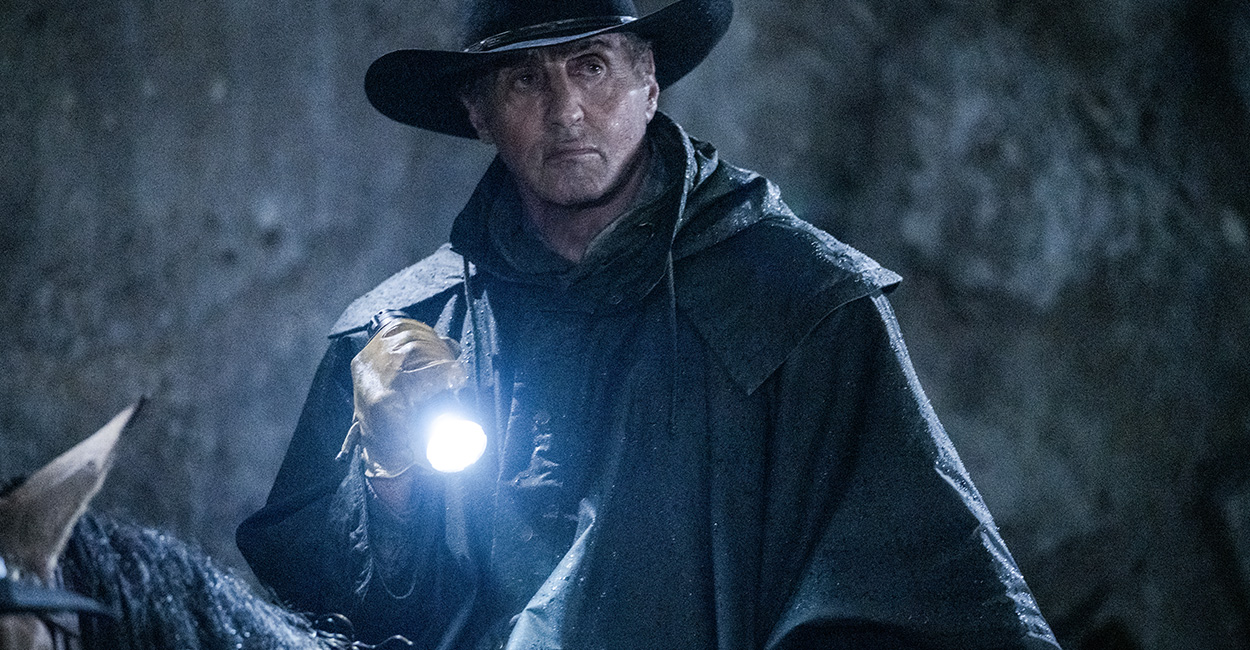 
All of which made RAMBO, in 2008, even more surprising. When the character came back to the big screen after 20 years in hibernation, he was stripped of almost all his fantasy trappings. John Rambo is living off the grid in Thailand, working as a boat captain and doing everything possible to avoid his past. Hired for a humanitarian journey into Burma, Rambo is soon recruited to rescue Christian missionaries taken hostage by Burmese militants.

Unlike the previous two sequels, this version of John Rambo is almost more monster than man. Once he goes into action he cannot stop himself, and the things he does to people in RAMBO are… disturbing. This is an action movie for the era of movies like SAW, where gung-ho bullet slinging gives way to something more like horror. The 2008 movie, along with TAKEN and THE DARK KNIGHT, released the same year, pushed action movies towards more grim and violent storytelling. It's hard to imagine the rise of movies like THE RAID and JOHN WICK without RAMBO.

At the end of that 2008 film, John Rambo finally goes home, to Arizona. That's where we find him in RAMBO: LAST BLOOD. The new movie looks like a return to the scale of the original film, as Stallone's character is set against a smaller force than in any of the other sequels. But the character must also feel the weight of all the violence he has committed in the past. If he was already struggling with his personal history before 2008's RAMBO, the decade since cannot have been a pleasant time. We don't know how all that history will affect the character's actions this time out, but one thing is certain: Once Rambo goes back into action, other movies will follow.

Get Tickets
Get email updates about movies, rewards and more! Subscribe to our emails