Ant-Man and the Wasp: Quantumania: Everything You Need to Know

Marvel's Phase Five begins here! The third ANT-MAN movie, ANT-MAN AND THE WASP: QUANTUMANIA, will come to theatres hot on the heels of BLACK PANTHER 2, and it will feature the villain who will be the primary antagonist through the next AVENGERS movie. Oh, and it also has MODOK! If you're not much of a comic book reader that name might mean little to you, but we're going to change that.

While relatively little is known about the plot right now, we do have quite a few details we can pass along. Here's everything you need to know about ANT-MAN AND THE WASP: QUANTUMANIA.

When Can You See Ant-Man and the Wasp: Quantumania?

ANT-MAN AND THE WASP: QUANTUMANIA opens exclusively in movie theatres on February 17, 2023.

Watch The First Trailer For Ant-Man And The Wasp: Quantumania

A version of this QUANTUMANIA trailer premiered at San Diego Comic-Con, and now everyone can see it!

This trailer sets up the core idea of the movie — that Scott Lang (Paul Rudd), his daughter Cassie (Kathryn Newton), Hope van Dyne (Evangeline Lilly), Hank Pym (Michael Douglas), and Janet van Dyne (Michelle Pfeiffer) are sucked into the Quantum Realm after Cassie uses a bit of technology to broadcast a signal into that mysterious area. There, they meet Bill Murray (more on that in a moment) and, more importantly, the ominous Kang the Conquerer.

Who Are All Those Characters In The Quantumania Trailer?

Honestly, we're still digging through back issues of old Marvel Comics to see if we can identify all those characters who seem to populate one area of the Quantum Realm.

Certainly the biggest character in the trailer is the full villainous form of Kang the Conquerer. He was seen in a different version in the "Loki" TV series. That version was less overtly evil, though he did not seem like anyone you want to mess with. Here he is presented as the Big Bad he has often been in comic books.

The Ant-Man and the Wasp: Quantumania Cast 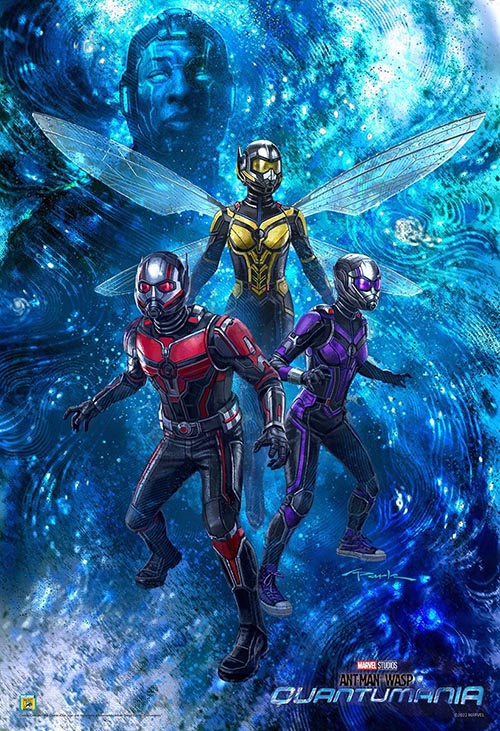 The QUANTUMANIA cast has quite a few returning actors, and several new ones, too. Paul Rudd, of course, returns as Scott Lang, aka Ant-Man, and Evangeline Lilly is also back as Hope van Dyne, aka the Wasp. Michael Douglas returns as Hank Pym, and Michelle Pfeiffer is back as Janet van Dyne.

One big addition is Jonathan Majors (THE LAST BLACK MAN IN SAN FRANCISCO), who is on board as a far more villainous version of Kang. In the Comic-Con footage, he said "You're an Avenger… have I killed you before?" which is one of the more chilling lines in a Marvel project so far. Kang won't merely be the villain here — he's going to be the new Thanos for Marvel for a while.

Additionally, Kathryn Newton (DETECTIVE PIKACHU) plays Lang’s now-teenage daughter, Cassie. She has a heroic alter-ego too. The movie's poster (above) features her alongside Ant-Man and the Wasp. In comics, Cassie has used two different names, Stature, and Stinger, but we don't know which (if any) she will adopt in the movie.

And, wait… Bill Murray is in the movie, too? The comedy legend let it slip while promoting THE FRENCH DISPATCH last year that he had recently made a Marvel movie, alluding to Peyton Reed as the director. Now the trailer shows us that the heroes run into Murray's character inside the Quantum Realm and that he has some connection to Janet van Dyne.

What is the Plot of Ant-Man and the Wasp: Quantumania

Beyond the fact that Ant-Man will be facing Kang and exploring the Quantum Realm, not much is known about the plot of ANT-MAN 3. However, as Scott Lang was trapped in the quantum realm for five years and missed the growth of his young daughter into a teenager, there will most likely be a sub-plot in which the two characters rebuild their relationship.

Who the Heck Is MODOK?

MODOK is one of the Marvel characters who is so silly that he loops all the way around the end of the spectrum and becomes cool again. His name is actually an acronym for Mental Organism Designed Only for Killing. Yes, that's right. He's also basically a giant head on a flying platform/helmet/thing. And just as you would if your name was Mental Organism Designed Only for Killing, he scowls a lot.

You might ask why MODOK is basically a giant head. Well, he was originally a guy called George Tarleton, who worked for Advanced Idea Mechanics (A.I.M). An experiment meant to increase his intelligence also drastically remade him physically — and drove him insane. The newly-transformed MODOK killed most of the people around him, took over A.I.M., and has been making trouble around Marvel ever since. And we love him for it.

MODOK briefly appears in the QUANTUMANIA trailer shown at Comic-Con, but he does not speak, so we do not know who plays him.

The Creative Team Behind Ant-Man and the Wasp: Quantumania

With Peyton Reed, who made the previous two ANT-MAN movies, back in the director’s chair, we know QUANTUMANIA is in good hands. "Rick and Morty" writer Jeff Loveness is also in the credits, as he wrote the screenplay. They wrapped principal photography back in November, and it seems like the work is moving forward quickly.

All images courtesy of Marvel Studios.

Why Did Avatar: The Way Of Water Take So Long To Make?