Avatar 2: Everything You Need To Know

Cast your mind back to 2009, when a little movie called AVATAR absolutely took the world by storm. Everyone who loved movies and even a lot of people who were merely curious had to see James Cameron's chronicle of the distant planet Pandora.

Nevertheless, its narrative did carry weight. Viewers fell in love with the world of Pandora and its blue, catlike inhabitants. Now, the sequel is almost here! We're ready to go back to Pandora, but there are big questions. Is a similar leap in visuals possible when pretty much every big-budget movie now utilizes photorealistic computer effects? Where will the new story take the established characters? Is anyone willing to bet against James Cameron? Here's the first teaser trailer and everything we know about AVATAR: THE WAY OF WATER. We can hopefully answer some of those questions, and many more.

When Does Avatar: The Way of Water Come Out?

Rejoice!! The AVATAR: THE WAY OF WATER trailer is finally upon us. Though it is largely a series of disconnected imagery from the film, it’s hard to not come away from the beautiful minute and a half long teaser positively giddy with excitement seeing everyone’s favorite giant blue people back on the big screen once again.

What Is Avatar 2 About?

That’s quite a question, though we now have a little bit of info as to the plot of the new AVATAR film. The new film will be picking up where the last one left off over a decade ago. Protagonists Sully and Neytiri and their family live together on the planet of Pandora. But their peace is broken, and they must defend themselves and their people from new threats.

Now, does the new trailer give any extra insight not this brief plot synopsis? Well, not really. The teaser doesn’t give a ton of additional info, aside from a brief voiceover from Sully and a smattering of disconnected imagery – unsurprisingly a lot of which is underwater. 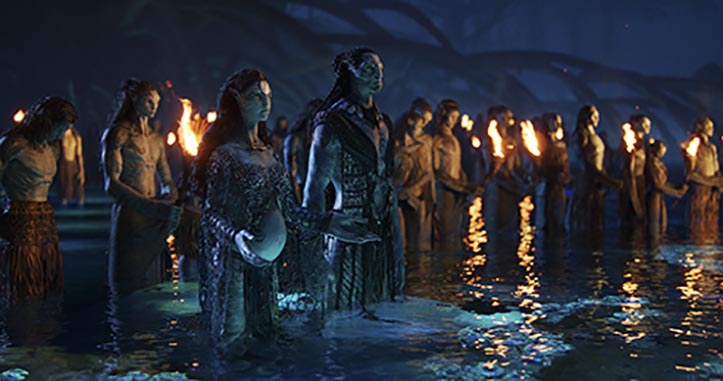 Starting with the most obvious players, Sam Worthington and Zoe Saldana will return as star-crossed lovers Jack Sully and Neytiri. Supporting players, such as Giovanni Ribisi, will return as well.

Then there are the dead ones – sort of. Sigourney Weaver’s Dr. Grace Augustine died in the first film, though Weaver will be returning in as yet undisclosed new role. Stephen Lang’s villain, Colonel Miles Quaritch, will be returning for both THE WAY OF WATER as well as AVATAR 3. And then on top of that, quite a few new actors will show up on Pandora. Vin Diesel, Kate Winslet, Michelle Yeoh, and Jemaine Clement will join the cast as all-new characters.

Who Is the Villain in Avatar 2?

As mentioned above, Stephen Lang returns in AVATAR 2, despite his character seeming to have perished in the first movie. Way back in 2013, James Cameron addressed this, telling Deadline "I’m not going to say exactly how we’re bringing him back, but it’s a science fiction story, after all. His character will evolve into really unexpected places across the arc of our new three-film saga."

Four years later, Cameron emphasized the fact that Lang's character, Colonel Quartich, who used a large mechanical suit in the AVATAR finale, returns for all the sequels. "There’s not a new villain every time, which is interesting," he said. "Same guy. Same m**********r through all four movies. He is so good and he just gets better. I know Stephen Lang is gonna knock this out of the park."

We have seen Worthington's character Jake Sully embrace a non-human existence in order to continue his life on Pandora. So will we see Quartich also trading his humanity for a mechanized body so that he might continue his fight?

We all know who made AVATAR 2: The self-proclaimed King of the World, James Cameron. AVATAR is his baby. As with many of his other cinematic babies, he proved that you can do a lot of things in life, but underestimating James Cameron should not be one of those things. Yes, it has been a while since AVATAR came out, but maybe that break was the perfect amount of time for audiences to become excited for another trip to Pandora.

AVATAR: THE WAY OF WATER opens on December 16.

Avatar: Win A Dream Vacation In Our Pandora Sweepstakes

Halloween: How to Watch the Halloween Movies in Order