Indiana Jones 5: Harrison Ford Is Back in Action

Amazingly, Indiana Jones is Harrison Ford's longest-running character. When INDIANA JONES 5 — final title to be revealed — comes out in 2023, Indy will have been fighting Nazis with a pistol and whip for 42 years. While this new sequel to RAIDERS OF THE LOST ARK is likely to bear many hallmarks of the character, it also brings big behind-the-scenes changes to the series.

INDIANA JONES 5 opens on June 30, 2023. With more than a year to go before release, you probably have questions about INDY 5. Fortunately, we have answers. Trust us. 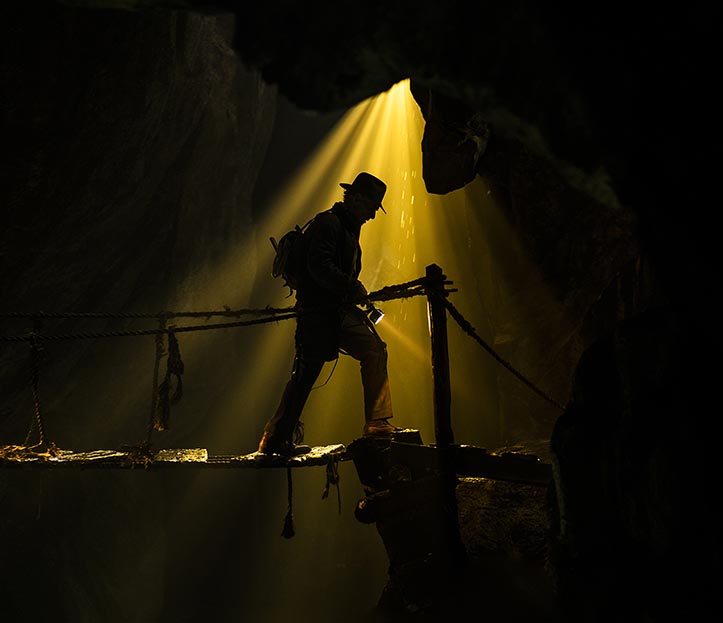 Yes! The image above is the first look at Ford in the signature hat and jacket. (Lighting in this image suggests that Ford also still wears Indy's signature boots: The Alden 405, now called the Indy Boot, which is still made and sold by Alden. Supposedly, these were the boots Ford wore when he worked as a carpenter before getting famous, and he insisted that Indy wear them, too.)

What Will Indiana Jones 5 Be Called?

We don't know the official title of INDIANA JONES 5. Disney and Lucasfilm will reveal the title sometime in the near future.

Remember those big changes we mentioned? This is the first Indy movie not directed by co-creator Steven Spielberg. The INDIANA JONES 5 director is James Mangold, who made LOGAN and FORD V FERRARI. Spielberg is on board as a "very active" executive producer, however.

This is also the first Indy movie with no involvement from George Lucas. The STAR WARS creator came up with the original script that became RAIDERS OF THE LOST ARK before he made STAR WARS. In 1977, when friend Steven Spielberg mentioned wanting to make a James Bond movie, Lucas said "I've got something even better." Spielberg loved the script and they soon made a deal with Paramount to make up to five Indiana Jones movies. While Indiana Jones isn't ready to hang up his hat, Lucas was. So INDIANA JONES 5 moved forward without him.

What Year Does Indiana Jones 5 Take Place In?

We don't know but if the Indiana Jones film series pattern holds, it will take place in or around the early 1970s. The first three Indy movies took place in 1936, 1935, and 1938. There was a 19-year gap between LAST CRUSADE and THE KINGDOM OF THE CRYSTAL SKULL, and the timeline of the fourth Indiana Jones movie followed real life — the story was set in 1957. It has been 15 years since CRYSTAL SKULL, so the new movie might be set in 1972. That, of course, is just a guess.

Is Shia LaBeouf in Indiana Jones 5?

As far as we know, no. Shia LaBeouf is not in INDIANA JONES 5.

Who Else Stars in Indiana Jones 5?

Roles for most of these actors are mysteries at this point. Antonio Banderas reportedly plays a character who will be an ally to Jones.

What Is Indiana Jones 5 About?

We don't know for certain. Rumors say the plot involves the fountain of youth, but there have been multiple scripts for INDY 5. The fountain of youth story could be speculation or it could originate with a script that has been set aside. We know that when James Mangold joined the project as director, he wrote a new script with his FORD V FERRARI co-writers Jez and John-Henry Butterworth.

Is Indiana Jones 5 the Last Movie in the Series?

We don't know yet. Every time there's a new Indy movie it seems like it might be the last. Since Harrison Ford will turn 81 just after the release of INDIANA JONES 5, there's a good chance that this will be the final movie with Ford in the starring role.

You might think someone else could play Indy in a rebooted version of the series. Ford does not agree. In 2019, when asked about someone else taking the role, he said "Don’t you get it? I’m Indiana Jones. When I’m gone, he’s gone. It’s easy." Was he joking? With Ford, it can be difficult to tell.

All images courtesy of Paramount Pictures.