Space Jam: A New Legacy - Everything We Know

It's time to jam again! Fans have wanted a sequel to the 1996 NBA / Looney Tunes crossover SPACE JAM for more than 20 years. Now LeBron James is set to step into the very large shoes of superstar Michael Jordan as he leads the cast of SPACE JAM 2 — aka SPACE JAM: A NEW LEGACY.

Just as with the original movie, this SPACE JAM sequel envisions a collision between an NBA superstar and a whole roster of Warner Bros. animation icons, from Bugs Bunny to Marvin the Martian and, of course, Lola Bunny. The story sounds like nothing we expected — it seems to take inspiration from movies like TRON and RALPH BREAKS THE INTERNET — and we're eager to see how the comedic potential of all the ideas in action. Here's everything we know about SPACE JAM: A NEW LEGACY.

After a seemingly endless period of rumor and several years in development, SPACE JAM: A NEW LEGACY comes to movie theatres on July 16, 2021.

Is There a Space Jam 2 Trailer?

There are two SPACE JAM 2 trailers! (You can see the first one here.) While the first trailer introduces the basic characters and scenario, the one above really gets to the good material. Which is to say: More cartoons, and more guest stars. The good news? Bugs Bunny (and the rest of the Looney Tunes) look and sound great, in both classic line-drawn animation and newfangled 3D CG versions!

The original movie revolved around Michael Jordan and this SPACE JAM sequel is focused on the current superstar #23, LeBron James. There's really no one else who has the same mastery of the game and acting chops — if you saw TRAINWRECK, you'll know that LeBron can throw some dry wit into his acting game. 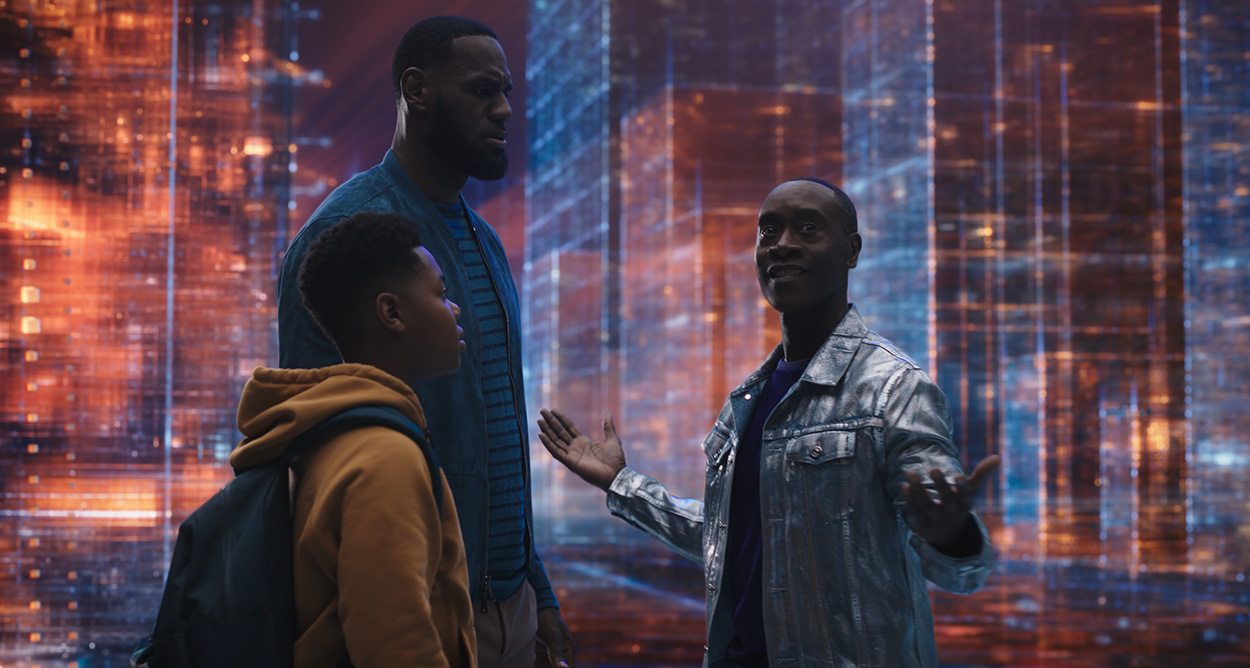 Here's the story of SPACE JAM 2: LeBron stars as a slightly fictionalized version of himself. In the movie, James has a son, Dom, who is more interested in video games than basketball. Somehow, Dom's computer skills catch the eye of an AI named Al G Rhythm (get it — "algorithm"?) played by Don Cheadle. That leads to father and son being pulled into the main Warner Bros. server so that the AI can leech away LeBron's social media followers.

With Dom kidnapped by Al G Rhythm, LeBron James has to round up some help. Naturally, being inside the Warner server, he turns to the Looney Tunes. (And, we can't help but wonder, the Animaniacs?) He's got to find Bugs Bunny and pull together the rest of the Tune Squad — including Lola Bunny, Daffy Duck, Tweety Bird, Marvin the Martian, and more — so that he can hoop his way back into the real world. All that's standing in the way is the AI's Goon Squad. No problem, right?

While the characters of SPACE JAM: A NEW LEGACY are dashing through the WB servers, they'll encounter a few surprising characters and properties. An Entertainment Weekly report on the movie quotes director Malcolm D. Lee saying "look, there's Mad Max, and there's Casablanca!" as he described the journey through the server. He also said, "we have a lot of the WB characters at the game, watching like they do at Rucker Park [in New York City]."

We see that quite a bit in the trailers, too. There's the Iron Giant, War Boys from FURY ROAD, Jack Nicholson's Joker from the 1989 BATMAN, and some characters that are even more surprising, like the Droogs from A CLOCKWORK ORANGE.

If the idea of SPACE JAM riffing on CASABLANCA — or actually using footage from the movie — seems like a bit of heresy, just remember that all the classic Looney Tunes cartoons cracked jokes about classical Hollywood all the time. It's not a stretch to say that quite a few kids first encountered Humphrey Bogart, and many other stars, from parodies in Bugs Bunny cartoons. And doesn't the landscape of MAD MAX: FURY ROAD seem like a pretty ideal place to find the Road Runner? Sure it does!

One of the original characters from the first movie, Lola Bunny, will also be reintroduced through a reference to another Warner Bros. movie. In SPACE JAM 2 Lola Bunny stars off in Themyscira, living among the Amazons from WONDER WOMAN. There are hints of a MATRIX reference as well, though perhaps that's just in dialogue, as heard in the trailer.

NBA players like Anthony Davis, Klay Thompson, and Diana Taurasi are also expected to show up, and we wouldn't be surprised to see even more real-life players making appearances, too.

The long-awaited SPACE JAM sequel director is Malcolm D. Lee, who previously made GIRLS TRIP and NIGHT SCHOOL. (And, yeah, if that last name has you wondering, he's Spike Lee's cousin.) Lee is joined by a couple of notable producers, such as BLACK PANTHER director Ryan Coogler and LeBron James himself.

SPACE JAM: A NEW LEGACY is written by Juel Taylor & Tony Rettenmaier & Keenan Coogler & Terence Nance. (Keenan Coogler is in fact the brother of producer Ryan Coogler, which is in keeping with the family leaning of this new SPACE JAM.)

Colin Farrell and Brendan Gleeson Reunite for The Banshees of Inisherin