Lords & Miller's Connected: Everything You Need to Know

When it comes to animation, movie fans tend to know the names of characters more than the names of the creators behind them. Two people stand out, however, because their films are so consistently good that their names have become synonymous with a stamp of quality — and huge fun.

Phil Lord and Chris Miller — or simply Lord & Miller — made the wonderful CLOUDY WITH A CHANCE OF MEATBALLS, then turned THE LEGO MOVIE into one of the best animated films we had seen in a long time, and then made what might be the single best Spider-Man movie, and possibly one of the greatest superhero movies, period: SPIDER-MAN: INTO THE SPIDER-VERSE. (In between they also made a couple of live-action hits, like the two 21 JUMP STREET movies.)

Now Lord & Miller return with CONNECTED, an animated film about a family on a cross-country road trip. This crew is dealing with a few personal problems, but those issues have to be swept aside when new forces threaten the world around them. Here's the CONNECTED trailer and everything we know about the new Lord and Miller movie.

CONNECTED is coming to theatres in 2020, but the movie's release date is not yet set.


The first CONNECTED trailer is here, and beyond the great-looking characters and story, which we'll get to in a moment, we also see that the movie plays with animation in ways that pick up exactly where INTO THE SPIDER-VERSE left off. Lord & Miller's Spider-Man movie (which the duo produced, with Bob Persichetti, Peter Ramsey, and Rodney Rothman directing) featured a wide array of animation styles. In most scenes, a few different types of art — line drawings, CG animation, comic book word balloons, and more — would collide on screen.

CONNECTED seems to be more visually restrained than INTO THE SPIDER-VERSE, but we see the same riot of animation in several scenes. As the movie gets into what we expect to be a hectic third act, we might see a lot of vibrant and daring animation. 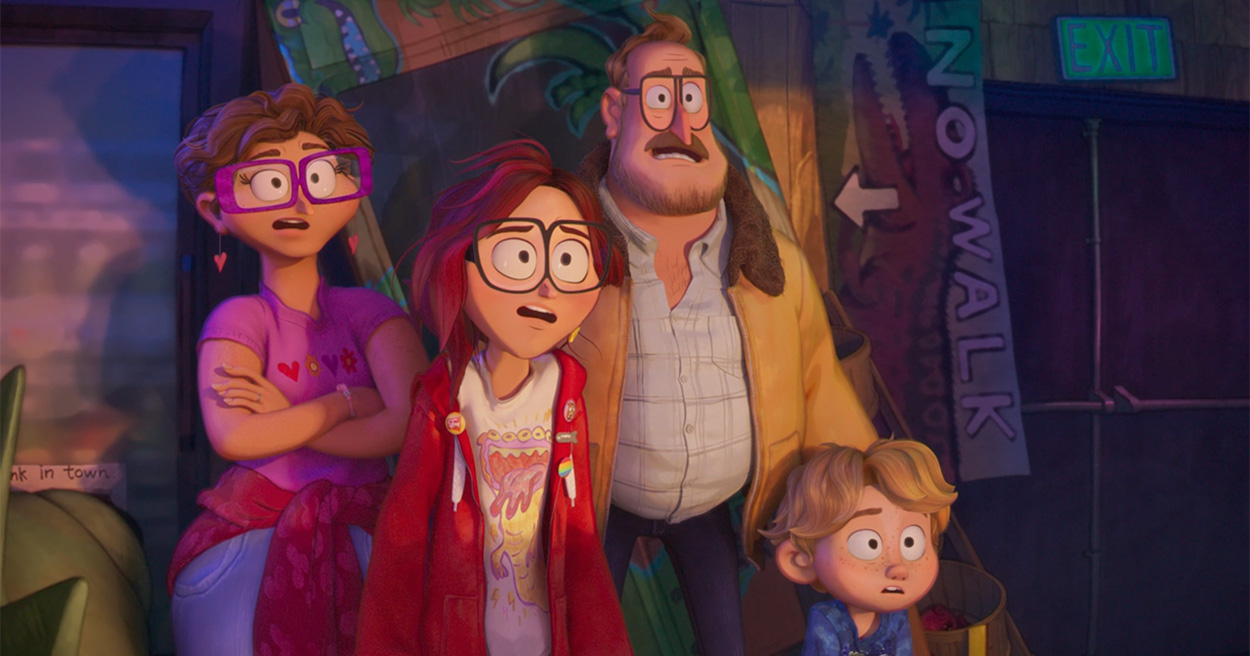 CONNECTED features a stellar voice cast, with Abbi Jacobson and Danny McBride voicing the primary characters, while Maya Rudolph and Mike Rianda round out the family unit. Eric Andre and Oscar winner Olivia Colman also voice characters, and we'll probably learn about more notable guest stars as the movie gets closer to release.

The Story in Connected

Every family features some conflict. All Katie Mitchell (voiced by Abbi Jacobson) wants to do is get to college so she can make new friends and dive into her dream of making videos and movies. Katie's dad, Rick (voiced by Danny McBride), is frustrated by Katie's constant use of technology. In a last-ditch attempt to get some family time, he decides that rather than putting his daughter on a plane to college, the whole family, including mom Linda (voiced by Maya Rudolph), little brother Aaron (voiced by Mike Rianda), and chubby pug Monchi, will road trip to her new school together.

That plan introduces quite a few issues and complications, but then things get really wild — all that technology that has been driving dad crazy starts to take control of the world. Suddenly, the Mitchell family, with the help of two friendly malfunctioning robots, has to work together in order to survive and maybe even save the world!

Phil Lord and Chris Miller began their careers with the MTV animated series "Clone High," and made their big-screen debut with CLOUDY WITH A CHANCE OF MEATBALLS, which adapted the children's book of the same name. They've worked in live-action television, as co-executive producers on HOW I MET YOUR MOTHER and exec producers on THE LAST MAN ON EARTH.

More than anything else, Lord & Miller have become known for being able to turn concepts that seem uncertain at best into great movies that are also big hits. They understand how to focus a movie around robust characters so that even the most outlandish sci-fi concepts seem plausible. CLOUDY is a great example of that, as the movie — about a failed young inventor who creates a machine that can turn water into food, which works far too well — is funny, moving and wild. CONNECTED feels more like a continuation of that sort of storytelling than anything else, and that's perfectly OK with us.

The producing duo has a great set of partners on this movie, too. Mike Rianda and Jeff Rowe, who wrote for the wonderful animated TV series "Gravity Falls," co-wrote the script; Rianda directs with Rowe co-directing. (Rianda also voices the main character's younger brother.)

Since we've only just seen the first look at CONNECTED there will be a lot more to come before the movie's release. Not that we need to see anything else! The first trailer, along with Lord and Miller's names in the credits, has us ready to buy tickets now.


All images courtesy of Sony Pictures.

80 For Brady Interview: We Talk to the Stars

Of An Age: A Yearning, Decade-Spanning Love Story