All the Little Women in Cinema History

Some stories are timeless and primed to be revisited for generations. LITTLE WOMEN is one of them. Louisa May Alcott’s novel has been the basis for more adaptations than we can count, in all kinds of media. At the movies alone, there have been at least six major versions of LITTLE WOMEN, and probably more than a few unofficial adaptations.

Each of these LITTLE WOMEN movies has been special in their own right, with a different take on the story of the four March sisters. With more than 100 years of cinematic history behind them, the March clan has been a part of the movie business for a long time. Now, as the endearing clan is brought back to the big screen by Greta Gerwig for the 2019 holiday season, let’s take a look back at the sisters’ big-screen adventures.


The novel "Little Women", originally published as two volumes in 1868 and 1869, was such a hit that it was a natural starting point for movie producers even in the early days of film. Movies didn't yet exist when the novel was first published (the first movies came about 30 years later, in the 1890s) but it didn't take long for enterprising early filmmakers to turn to the book.

The March sisters first made their way to the big screen in a 1917 silent film directed by Alexander Butler, who was a prolific British director in the early 1900s. Jo and the rest of her sisters didn’t stay away from the silver screen for long after that.

Another adaptation arrived in 1918, this time directed by a filmmaker named Harley Knoles. That film attracted great actors of the silent film era, such as Dorothy Bernard (who played Jo), Kate Lester, Conrad Nagel, and Henry Hull. Sadly, like so many silent films, both of these movies have been lost and will likely never be seen again.


We saw the March family again at the movie theatre in 1933’s LITTLE WOMEN. This adaptation was directed by George Cukor, a superstar filmmaker of the early Hollywood era. (You might know more of his 1940's work; Cukor made THE PHILADELPHIA STORY, GASLIGHT, and the Judy Garland version of A STAR IS BORN.

Cukor's LITTLE WOMEN was headlined by future Hollywood legend Katharine Hepburn, and also featured Jean Parker and Joan Bennett. Unlike its predecessors, which became casualties of the volatile nature of nitrate film stock (which burns easily and is difficult to store), this LITTLE WOMEN became a critical success, and even earned Cukor an Academy Award nomination for Best Director. He lost to Frank Lloyd, who directed CAVALCADE, which also won Best Picture. CAVALCADE has its high points but has not stood the test of time as well as Cukor's LITTLE WOMEN. Cukor did eventually win the Best Director Oscar for 1964's MY FAIR LADY. 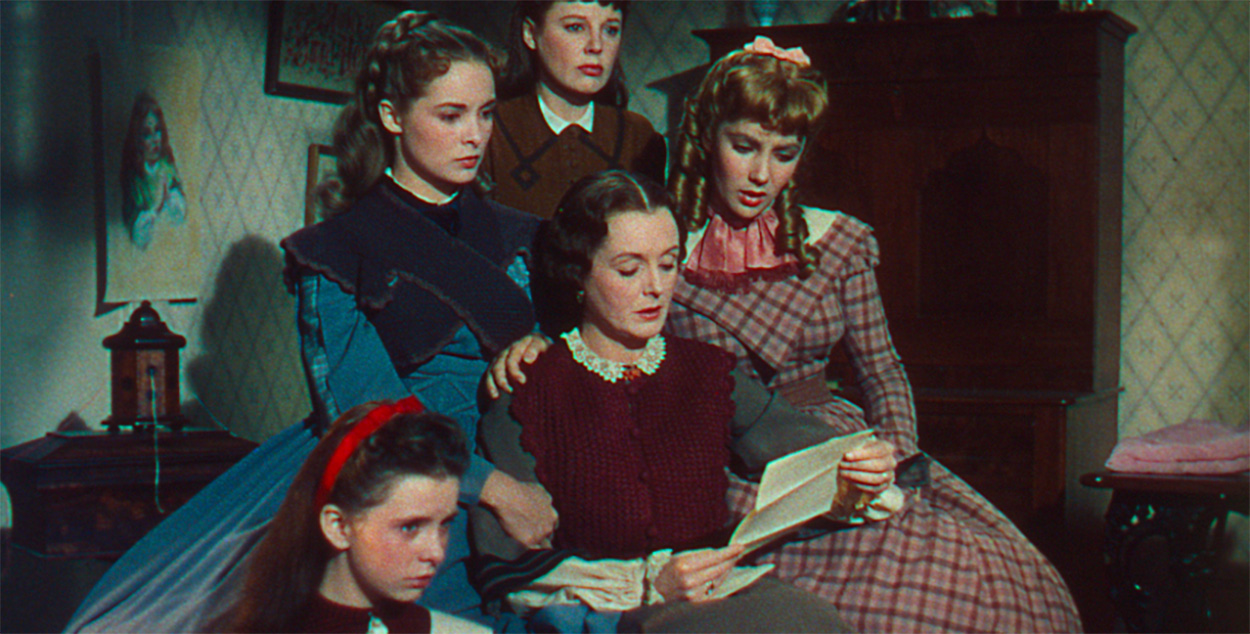 
The Little Women’s next foray on the silver screen came 16 years later, which is almost the same interval that passed between the 1918 and 1933 adaptations. This time, the film was overseen by Mervyn LeRoy, an actor-turned-director who also produced THE WIZARD OF OZ. Much like the previous LITTLE WOMEN, this 1949 picture attracted powerful talent, including June Allyson as Jo, Janet Leigh (of future PSYCHO fame) as Meg, and Elizabeth Taylor, who had at that point become a Hollywood powerhouse after starring in NATIONAL VELVET and COURAGE OF LASSIE, as Amy.

This was the March sisters' first outing in Technicolor, and the movie also changes a number of details from the original novel. While the cast is terrific, the overall effect of this adaptation isn't quite as effective as the 1933 version. None of which prevented it from being a hit!


The novel spawned an NBC miniseries in 1978, helmed by David Lowell Rich, but it wasn’t until 1994 that the story became another feature film. This adaptation was directed by Gillian Anderson, the first woman to helm a LITTLE WOMEN movie. The production was brought to life by an all-star cast of '90s stars — and several future Hollywood A-listers.

Winona Ryder starred as Jo; Christian Bale as Laurie; Claire Danes as Beth; Kirsten Dunst as the young version of Amy; and Susan Sarandon as Marmee, mother of the March sisters. While the 1940 adaptation was dinged for being too sentimental, Anderson's version found an excellent middle ground between maintaining the look and feel of the story's Victorian setting and giving her acting ensemble room to make the characters their own. This LITTLE WOMEN feels very alive and relevant; of all the adaptations on this list, it's the sleeper hit.

Anderson's adaptation of LITTLE WOMEN was a critical hit that earned three Academy Award nominations, including a Best Actress nomination for Winona Ryder.


Greta Gerwig’s LITTLE WOMEN isn’t the only modern adaptation of Louisa May Alcott’s story. In 2018, coinciding with the 150th anniversary of the novel, a version was produced starring Lea Thompson (BACK TO THE FUTURE) as the matriarch of the March family. This version brought the March sisters into the 21st century, proving the timelessness of its source material.

This version of LITTLE WOMEN didn't have the wide distribution of others, but that doesn't change that it offered a fun look at what the sisters’ lives would be like if they lived in a modern era. Even in a different context, the characters are as vital as ever.

LITTLE WOMEN continues to fascinate audiences around the world thanks to its timeless themes and charismatic main quartet. Greta Gerwig's new adaptation looks like more than just a new take on the story, however. It's a vital new way to look at the story, with a blend of vintage and modern characterizations that prove just how essential these women still are.


All images courtesy of Sony Pictures, unless otherwise specified.

80 For Brady Interview: We Talk to the Stars

Of An Age: A Yearning, Decade-Spanning Love Story