We're all spending a lot of time inside this spring, and many of you, like us, probably have kids at home. Keeping the the kids entertained and happy all day is no easy task, so we wanted to share a family activity that can entertain the kids while also keeping the spirit of moviegoing alive. We've got three coloring sheets inspired by the animated movies CONNECTED, PETER RABBIT 2, and THE ANGRY BIRDS MOVIE 2 — and bonus activity sheets for GHOSTBUSTERS: AFTERLIFE! Click each thumbnail to open up a larger version of each sheet, suitable for printing and coloring. Unfortunately, you'll have to supply your own crayons and colored pencils. In PETER RABBIT 2: THE RUNAWAY, the lovable rogue is back. Bea, Thomas, and the rabbits have created a makeshift family, but despite his best efforts, Peter can’t seem to shake his mischievous reputation. Adventuring out of the garden, Peter finds himself in a world where his mischief is appreciated, but when his family risks everything to come looking for him, Peter must figure out what kind of bunny he wants to be. 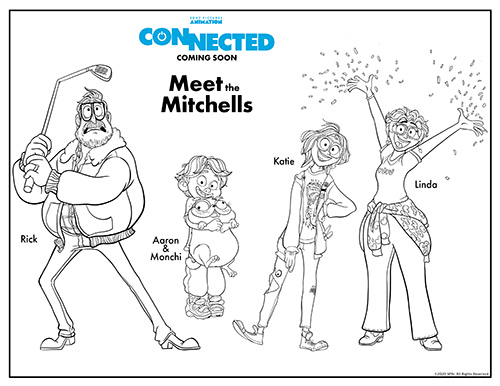 CONNECTED is an original animated comedy from director Mike Rianda ("Gravity Falls") and producers Phil Lord and Christopher Miller (SPIDER-MAN: INTO THE SPIDER-VERSE, THE LEGO MOVIE), about an everyday family's struggle to relate while technology rises up around the world! When Katie Mitchell (voiced by Abbi Jacobson) is accepted into film school, her plans are upended when her nature-loving dad Rick (voiced by Danny McBride) determines the whole family should drive Katie to school to bond as a family one last time. Katie and Rick are joined by Katie’s wildly positive mom Linda (voiced by Maya Rudolph), her quirky little brother Aaron (voiced by Mike Rianda), and the family’s delightfully chubby pug Monchi for the ultimate family road trip. Suddenly, the Mitchells’ plans are interrupted by a tech uprising: all around the world, the electronic devices people love – from phones, to appliances, to an innovative new line of personal robots – decide it’s time to take over. With the help of two friendly malfunctioning robots, the Mitchells will have to get past their problems and work together to save each other and the world! 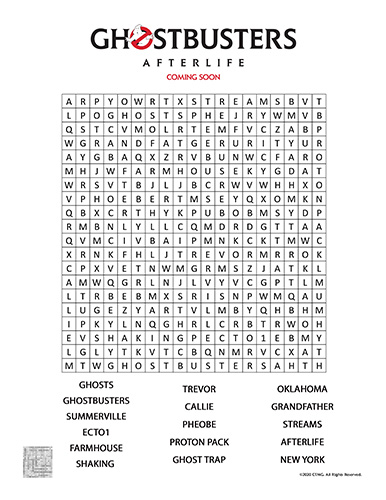 In GHOSTBUSTERS: AFTERLIFE, when a single mom and her two kids arrive in a small town, they begin to discover their connection to the original ghostbusters and the secret legacy their grandfather left behind. This direct sequel to the first two movies in the series comes from director Jason Reitman, son of original GHOSTBUSTERS filmmaker Ivan Reitman, with the actors who played the first Ghostbusters team all set to reprise their roles. In THE ANGRY BIRDS MOVIE 2, Red, Chuck, Bomb and the rest of their feathered friends are surprised when a green pig suggests that they put aside their differences and unite to fight a common threat. Aggressive birds from an island covered in ice are planning to use an elaborate weapon to destroy the fowl and swine way of life. After picking their best and brightest, the birds and pigs come up with a scheme to infiltrate the island, deactivate the device and return to their respective paradises intact.

What You See When You See A ScreenX Movie

Where To Watch The 2023 Oscar-Nominated Movies