The Origin of the Secret Service

The King's Man: Everything You Need to Know

You might have had an experience like this at the theatre recently: A trailer plays that seems, at first, like a prestigious (if action-packed) period film. It's got a starry cast running around in a cool, proto-James Bond world of espionage, war, and intrigue. Then the title card is revealed, and the audience lets out a collective gasp.

This trailer is for THE KING'S MAN. Why the gasp? Because this film snuck up on many audiences, even big fans of KINGSMAN: THE SECRET SERVICE and KINGSMAN: THE GOLDEN CIRCLE, for which this new movie acts as a prequel. Want to know what's going on with this new chapter in the hard-hitting and frequently funny story? Here's everything you need to know about THE KING'S MAN. 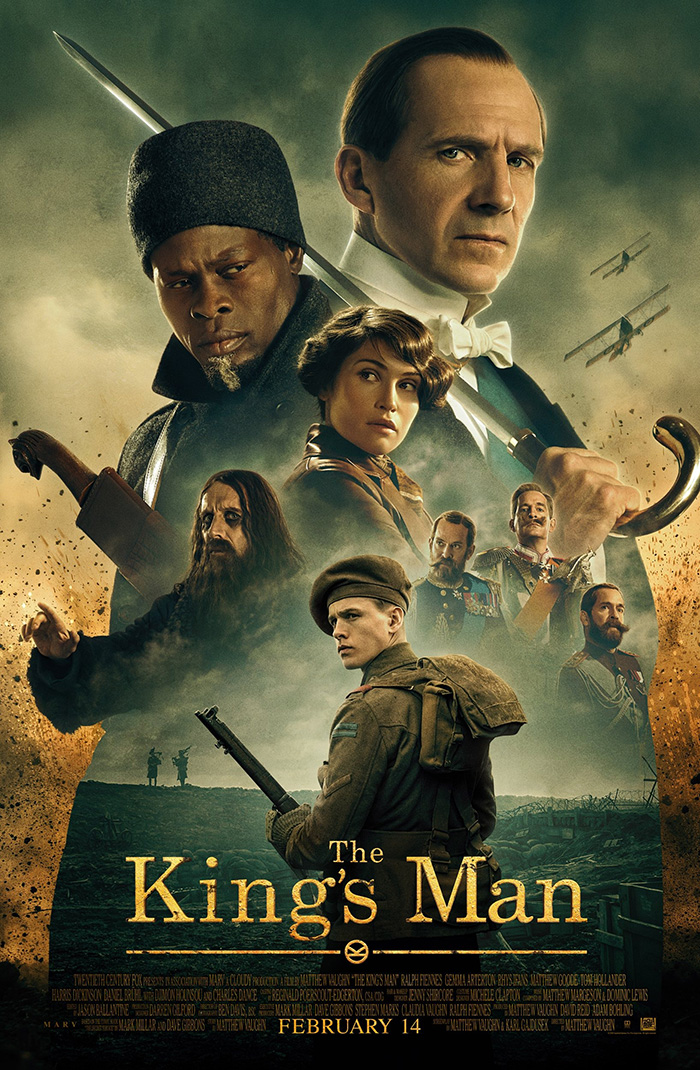 This prequel is coming soon! THE KING'S MAN opens on September 18, 2020. You might have heard that the movie would be released on Valentine's Day in 2020, and that was originally the plan. In November, however, 20th Century Fox pushed the release date back to September.

The two existing KINGSMAN movies are cheeky, hyper-violent takes on the spy genre. They revolved around a shaggy young Londoner (Taron Egerton in his first major role) who is recruited by a decorated espionage veteran (Colin Firth) in order to take on a series of increasingly-outrageous threats. For this prequel, Vaughn (now working with co-screenwriter Karl Gajdusek) turns the clock back to World War I, to investigate the foundation of the Kingsman organization at a time of deep international strife.

This Was Actually Referenced in the First Movie

In the original film, Firth's character explains the history of his organization. "Since 1849, Kingsman tailors clothed the world’s most powerful individuals. By 1919, a great number of them had lost their heirs due to World War I. That meant a lot of money going un-inherited and a lot of powerful men with a desire to preserve peace and protect life. Our founders realized they could channel that wealth and power for the greater good.” It's almost like the groundwork for this prequel was laid all the way back at the beginning!

The King's Man Trailer Is... Insane


Check out the trailer that makes fans gasp in disbelief. Perhaps the score, with a piano picking out the notes of Black Sabbath's "War Pigs," should be the first indication that this isn't a prestige war drama. Harris Dickinson, who can currently be seen in MALEFICENT: MISTRESS OF EVIL, stars as the young Conrad, recruited by the Duke of Oxford (Ralph Fiennes), into the nascent spy organization. “While governments wait for orders, we take action,” Fiennes says.

As the conflagration of World War I ignites (one shot in the trailer suggests that Fiennes’ character is there for the assassination of Archduke Ferdinand), the Kingsmen must band together to face an evil that is sweeping across the world. That’s a lot of ground to cover. But if any franchise has consistently mixed high concept plot with thrilling, inventive action sequences, it’s this one.

The King's Man Cast Is to Die For

In addition to Dickinson and Fiennes, the balance of THE KING’S MAN cast is really something. Rhys Ifans plays Rasputin (!), and Tom Hollander, from PIRATES OF THE CARIBBEAN, appears in three roles: George V and Wilhelm II (they were first cousins in real life), and also Nicholas II. The cast also includes Gemma Arterton, Matthew Goode, Daniel Bruhl, and Charles Dance (as the original Arthur).

None of the trailers have even revealed Aaron Taylor-Johnson, who was added to the cast when the other actors came on board. Similarly, Stanley Tucci is also set to appear.

A word about Grigori Rasputin, the real-life figure played by Rhys Ifans, who seems likely to be the villain of THE KING'S MAN. Rasputin has been famed as an advisor to Russia's Tsar Nicholas II, and as a behind-the-scenes manipulator. He's also reputed to be, depending on who you talked to a mystic, a prophet, and possibly even a sorcerer.

Spoiler: In real life, Rasputin had no mystical powers. He was just really good at convincing people to put his plans into action. In THE KING'S MAN, however, maybe he will have some supernatural abilities. The trailer certainly alludes to that idea, when images of Rasputin accompany song lyrics like "just like witches at black masses" and "sorcerer of death's construction."

This Won’t Be the Final Kingsman Outing

THE KING’S MAN is a nifty expansion of the original films, and it is not the only project in development. Vaughn recently announced that a third proper KINGSMAN movie is in the works, with Egerton and Firth returning. There's also a potential TV series, and a likely spin-off film, called STATESMAN, about the American version of the organization. (That, you may recall, was introduced in KINGSMAN: THE GOLDEN CIRCLE.) Channing Tatum, Jeff Bridges, and Halle Berry are all slated to return in STATESMAN.

For now, however, we'll concentrate on this prequel, and await the secrets it might reveal. THE KING'S MAN has a lot of history to unpack, and we're excited to see how it points the way forward for the series. There's a lot more KINGSMAN material on the horizon. Get your formal wear ready.