Evolution of a Star

From Marvel to Knives Out: Chris Evans' Journey

For almost 10 years, the name Chris Evans has meant one thing: Captain America. Although Evans’ career began long before the Marvel Cinematic Universe came into being, the actor has become best-known around the world for playing Steve Rogers, the soldier-turned-superhero who’s been fighting bad guys since World War II.

When AVENGERS: ENDGAME hit theaters in May, it signaled the conclusion of a huge chapter for Marvel Studios — and for Evans, who is unlikely to return to the role that has defined his career. As Evans begins a new chapter in his career, we take a look back at how far he’s come and what he’s doing next, including the November thriller KNIVES OUT.


There was a time, before the Marvel Cinematic Universe, when Chris Evans was known for movies that didn’t involve superpowers. These were movies like the cult classic teen comedy spoof NOT ANOTHER TEEN MOVIE, in which he played the satirical version of every male love interest in a teen movie from the late ’90s and early ’00s. (He really skewered characters played by actors like Freddie Prinze Jr.)

A few years after what is arguably his best non-Marvel role, Evans starred in a pair of popcorn flicks that tested his leading man capabilities, while also solidifying them. CELLULAR was basically a Liam Neeson action thriller before there was such a thing, while THE PERFECT SCORE also featured future Marvel co-star Scarlett Johansson. Evans followed these up with a solid but little-seen dramatic thriller called LONDON, co-starring Jessica Biel and Jason Statham.

Ironically, Marvel gave Evans his first big boost… before the Marvel Cinematic Universe (MCU) was even born. 2005’s FANTASTIC FOUR helped the actor's career really take off. While the film was successful enough to merit a sequel, the series failed to hook audiences enough to become a huge franchise. Thankfully, as we all know, Evans got another shot at superhero super-stardom a few years later, with CAPTAIN AMERICA: THE FIRST AVENGER.

Before he landed the role of a lifetime, Evans featured in a few more great movies, which helped demonstrate his range. In SCOTT PILGRIM VS THE WORLD, the comic book adaptation from SHAUN OF THE DEAD director Edgar Wright, Evans played a hunky, meathead action star. The role gave Evans another chance to show off his comedic skills — which are every bit as awesome as his ability to throw a punch. Evans also delved into his more serious side in SUNSHINE (seen above), Danny Boyle’s harrowing sci-fi thriller about a space crew on a perilous mission to restart a dying sun.


And then there was Captain America. After making his debut as Steve Rogers in 2011’s CAPTAIN AMERICA: THE FIRST AVENGER, Evans quickly followed it up with 2012’s THE AVENGERS, thus embarking on a thrilling journey that would span eight years and 11 movies (that number includes a couple of post-credits scenes and cameos, of course).

His work with Marvel gave Evans a solid foundation to build on. In between comic book blockbusters, Evans flexed his acting skills in a several films that showed off his incredible range even as they reminded audiences that he was more than the Avengers guy. In SNOWPIERCER (seen above), the 2013 sci-fi thriller set in a dystopian world where the last remaining humans live aboard a massive super-train, Evans played the film’s protagonist. While his fighting skills didn't go to waste, SNOWPIERCER gave him a chance to deliver truly heart-rending drama alongside stars like Octavia Spencer, Jamie Bell, and Tilda Swinton. Evans delivers one of the film's most staggering lines, and does so in a way that ensures you'll never forget it. 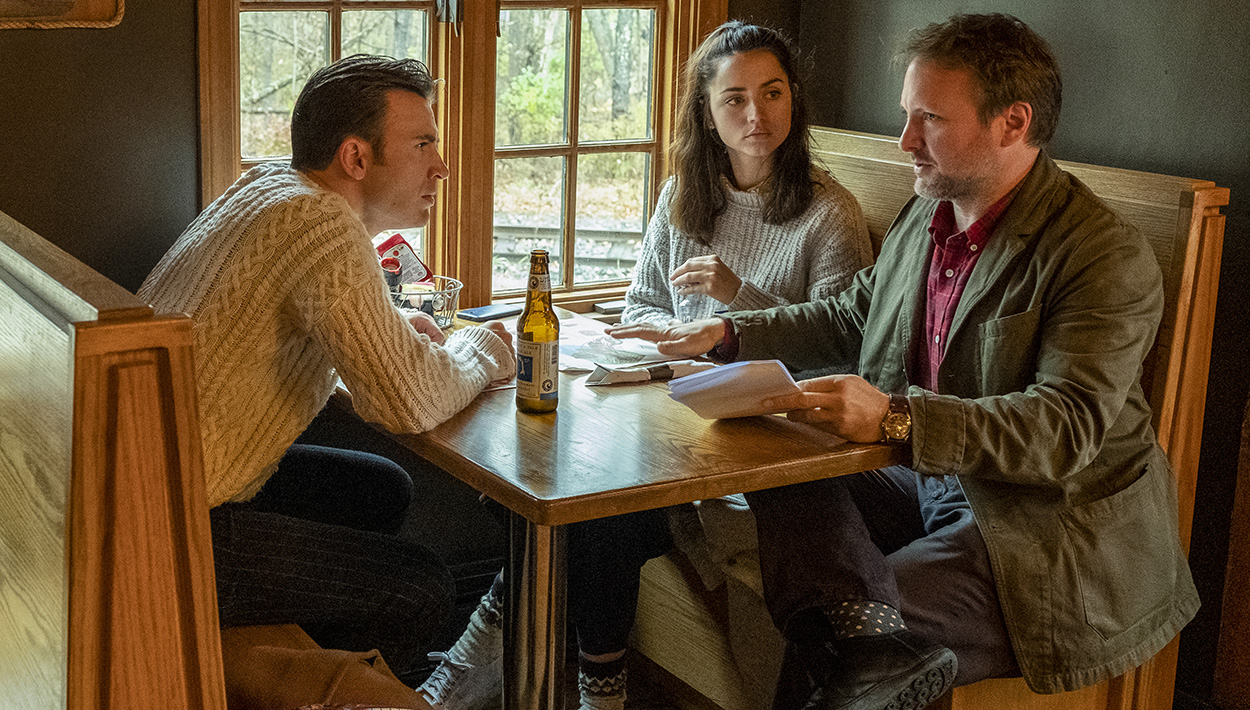 
It won’t be difficult for Evans to find work now that his time in the Marvel universe might be over. He has already starred in a couple of very cool new movies: First is the Netflix drama THE RED SEA DIVING RESORT, in which he appears alongside Michael Kenneth Williams, Haley Bennett, and fellow former Marvel star Ben Kingsley; the film tells the incredible true story of a group’s attempt to rescue refugees from Sudan in 1977.

On November 27, Evans will also join an amazing all-star cast in KNIVES OUT, from STAR WARS: THE LAST JEDI director Rian Johnson. (Evans and Johnson are seen above, with co-star Ana de Armas, on the set of the film). It’s a comical murder mystery in the vein of classic Agatha Christie stories, and also stars Daniel Craig, Jamie Lee Curtis, Toni Collette, Jaeden Martell, Katherine Langford, LaKeith Stanfield, and many more. The KNIVES OUT trailer has already given Evans one of his most meme-able moments, which is really saying something after all that Marvel work!

While Evans has kept busy with acting work, there’s also potential for him to step behind the camera. He's already directed one film, the 2014 romantic drama BEFORE WE GO, in which he also starred, with Alice Eve. The actor has also been very vocal on Twitter and has devoted much of his personal time to charitable causes and political activism. Could a future in politics be in the cards for our former Captain America? Or a successful directing career? Just like his most famous character, there's no chance that Evans will go back on ice.


Are you ready for KNIVES OUT?