Pixar's Onward: Everything You Need to Know

Pixar always brings audiences into vividly imagined worlds that are full of detail and nuance, populated by characters that seem as real as anyone we know in reality — all of which brings each fantastic adventure to dazzling life.

The studio's next film might go further into the fantastic than we had expected. ONWARD, one of two Pixar animated features coming to theaters next year, promises to be unlike anything Pixar has ever produced before. It's the story of two brothers and their quest to reunite with their father; the only hitch in their adventure is that their dad has been dead for many years. Here’s everything you need to know about ONWARD. 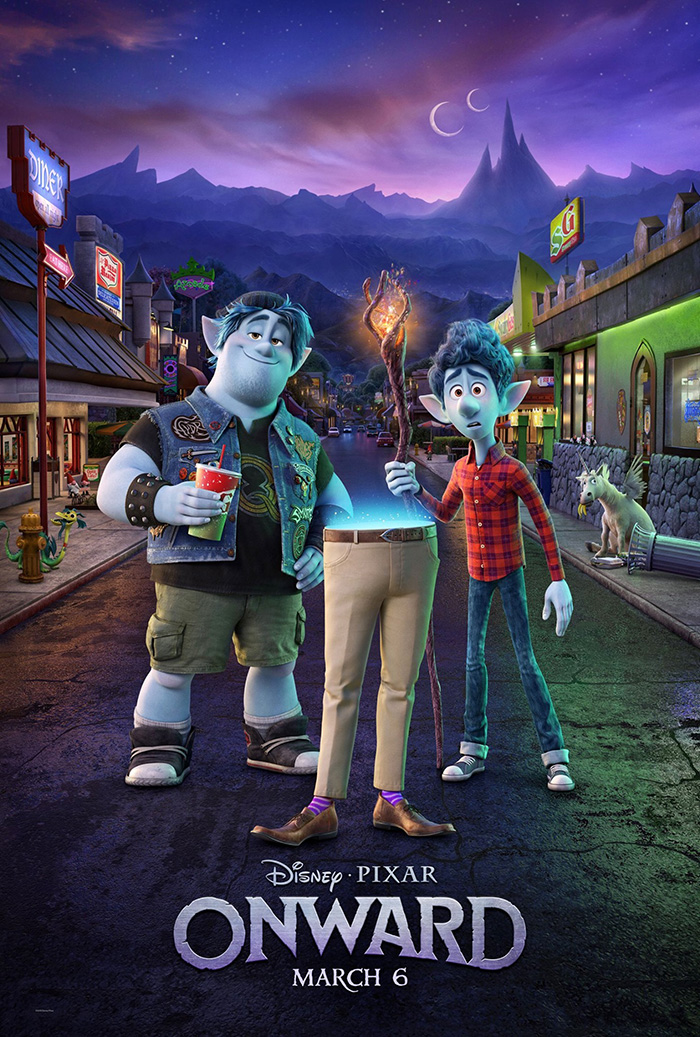 Pixar's new movie is coming to theatres a lot sooner than you might think. ONWARD is set to release on March 6, 2020.

Onward's Trailer Is Unlike Any Fantasy We've Seen


As you can see from the latest trailer, this is a fantasy movie, but a fantasy movie unlike any you’ve ever seen before. Instead of taking place in some distant, imagined past, with a vaguely European aesthetic and a medieval feel, this takes place in the here and now. And while modern suburbia might not seem like the most obvious setting for a lush fantasy, it should do much to help identify emotionally with the action and the main characters, a pair of elf brothers voiced by Tom Holland and Chris Pratt.

What Song Is in the Onward Trailer?

Depending on which trailer you're talking about, there are two answers here. The ONWARD teaser trailer featured "Magic" by The Cars, which is a super-pleasant pop song. The full-length ONWARD trailer features "Hocus Pocus" by the band Focus — and yes, the weird yodeling heard around the film's title screen is part of the original song. "Hocus Pocus" really rips, and is used pretty frequently in film and TV. We last heard it in Edgar Wright's movie BABY DRIVER. If you think the version heard in the trailer is wild, check out this double-speed live performance, from 1973.

The World of Onward

From the trailer you can see that our main characters Ian and Barley (Holland and Pratt) live inside mushrooms (a familiar fantasy trope seemingly as old as the genre itself), but those 'shrooms are found in a suburban neighborhood called New Mushroomton with neatly manicured lawns. Instead of riding some kind of mythic beast, they cruise around in a busted-up van, and instead of raining terror from the sky, dragons are cuddly house pets. Oh, and unicorns, instead of inspiring awe, are rummaging around in the trash.

At the D23 Expo in 2017 director Dan Scanlon described it as a fantasy world where magic had been ignored in favor of convenience. Why use a spell when you can use a dishwasher? So, yes, the main characters might be elves, but the pomp and grandeur of Tolkien has been replaced with something a bit more commonplace and everyday. So when magic does erupt, it’s really special.

It’s Pixar’s First Original Film in a While

Yes, the concept in ONWARD is super original. Remember, too, that this is the first non-sequel Pixar movie since COCO, back in November 2017. That’s a long time to wait for some brand-new Pixar IP, even if the studio’s sequels (like THE INCREDIBLES 2 and TOY STORY 4) are near-classics. From everything we’ve seen so far, this world is so expansive and intricate that ONWARD could be the next Pixar franchise. If nothing else, the unicorns in the trailer deserve their own series.

The voice cast for ONWARD is exciting, especially considering that it is led by a couple of Marvel all-stars. Chris Pratt (Star-Lord) and Tom Holland (Spider-Man) play brothers Barley and Ian Lightfoot, who embark on conjuring a spell that will allow them to reconnect with their long-lost father. And judging by the trailer, that quest will take a lot of twists and turns, with the brothers running into all sorts of fantasy creatures along the way. Those biker sprites are a hoot. Joining them on their quest are Julia Louis-Dreyfus (a Pixar vet from A BUG’S LIFE) and Octavia Spencer, as the Manticore, a once-fearsome warrior who now owns a TGIFriday’s-style family restaurant.

Pixar has always been known for surprising and relatable characters, but ONWARD pushes the studio's palette in new directions. In keeping with the "swords and sorcery" fantasy inspirations, the movie's character designs are right out of a Dungeons and Dragons fever dream. The Manticore voiced by Octavia Spencer is imposing, even scary, but Pixar also made certain that she has the capability to express a wide range of emotions. That holds true for all manner of other mythical creatures, from centaurs to fauns and a cyclops.

It’s Going to Make You Cry

Co-writer and director Dan Scanlon, whose last movie for Pixar was MONSTERS UNIVERSITY, debuted the project back at the D23 Expo in 2017. Back then, he introduced it in a poignant way. He said that he was too young to remember his father, who died while he and his brother were very young. Later, he uncovered an audio recording of his father's voice, uttering one word. It inspired him to write this story and to imagine what it would be like for him to return and spend the day with his sons.

If that’s how the movie came to be, just think about how many emotions you’ll be feeling when you watch ONWARD in its finished form. Pixar is well known for making audiences weep like children and a movie with this kind of emotional center will undoubtedly reduce everyone who watches it to a blubbering puddle.


All images courtesy of Pixar and Walt Disney Studios.

Black Adam: What Is the Justice Society of America?