The Best Batmobiles to Cruise the Big Screen

Robert Pattinson will is the latest actor to embody the Dark Knight Detective, in THE BATMAN, from director Matt Reeves. The movie will have everything you’d expect from a Batman outing – gadgets, super-villains (including Paul Dano’s Riddler and Colin Farrell’s Penguin) and, of course, a new Batmobile.

Judging from the trailer that was revealed as part of the DC Fan Dome event, this new Batmobile is totally awesome. It's a souped-up, armor-plated muscle car that fits perfectly within the new movie’s realistic-but-still-comic-book aesthetic. But where will Bat-Pattinson’s new ride chart on the long history of cinematic Batmobiles? That, of course, remains to be seen. As we wait for Reeves’ movie to open, we thought it’d be fun to look back at the cinematic Batmobiles. And while this is a list of our favorites, we want to cite one very cool runner-up: the Batmobile from THE LEGO BATMAN MOVIE. It’s underrated, it’s totally wacky, and we love it to pieces. (See what we did there?)

Now don’t get us wrong, Ben Affleck’s Batmobile, first seen in Zack Snyder’s BATMAN V. SUPERMAN: DAWN OF JUSTICE and glimpsed later in SUICIDE SQUAD and JUSTICE LEAGUE, is cool. And it fits perfectly with Snyder and Affleck’s depiction of the character. The design is chunky, militaristic, and seemingly splits the difference between Christian Bale’s Tumbler and Michael Keaton’s classic Batmobile. But also feels almost unnecessarily brutal, with that emphasis on mounted guns. Also, it’s not terribly batty. Still, this Batmobile helped establish that Affleck’s Batman was very different from those we’d seen before.

This Batmobile is insane. One of the edicts for Joel Schumacher’s Bat-sequel was that it be more "toyetic." To that end, Schumacher and his confederates designed a Batmobile that every little kid would want to zoom around his or her playroom. This design certainly gets points for boldness; it incorporates elements from BATMAN FOREVER (more on that in a minute), including the translucency of parts of the chasse and the neon piping, combining it with the exaggerated length and shape of the Batmobile that appeared in "Batman: The Animated Series." And the nose cone has a flashing, rotating light for some reason. Like the rest of BATMAN & ROBIN, the Batmobile is heightened and extreme, walking the line between being a total eyesore and a gorgeous postmodern work of art.

In an alternate universe (and, given that we’re talking about a comic book character, it could happen), Swiss artist H.R. Giger designed the Batmobile. And it’s true – he tried. The artist, best known for designing the acid-blooded xenomorph from ALIEN, submitted concept art to Joel Schumacher that was truly out of this world. Giger's car looked like an X, or a pair of scissors. Ultimately, his design wasn’t chosen. Instead, Joel Schumacher's first take on the Batman story featured a Batmobile that was less visionary but equally extreme. This version has what can only be described as an “exoskeleton,” revealing a neon body underneath (we love the “ribs” on the side) and giant fins towards the back of the car. (The Batman logo on the hubcaps is also pretty cool.) It also has a nifty feature, revealed during a chase sequence – it can climb walls, just like Batman himself.

It’s the grooviest Batmobile baby! Based on the incredibly popular television show, BATMAN: THE MOVIE included many of the cast members from that series and, most importantly, its very cool, very 1960s Batmobile. While this ride isn’t the most sophisticated or most technologically tricked-out, it is just as iconic as any of the newer models. Sure, it’s basically an era-appropriate hot rod with a kind of bubble dome and some extra fins. That makes it identifiably stylized and sleek, and totally of its time. When you think of Batman in the 60s (either from the television show or movie), chances are you think about Adam West’s unique line delivery, the cards that say things like “POW!” and “ZANG!” and, of course, this wonderful Batmobile. 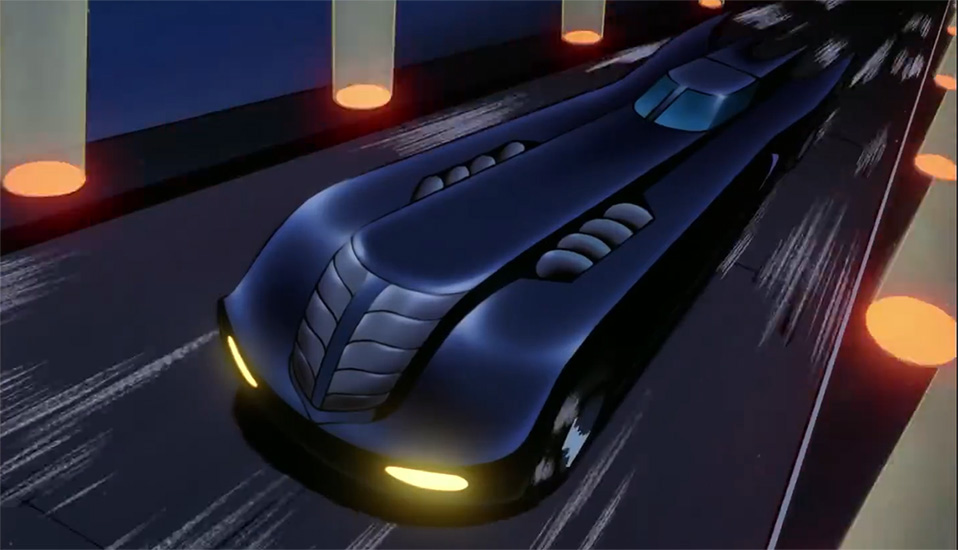 3. Batman: Mask of the Phantasm

BATMAN: MASK OF THE PHANTASM is another television show-turned-movie; this one was set into motion after the success of the first season of "Batman: The Animated Series." MASK OF THE PHANTASM is quietly ambitious as it creates a doomed romance for Bruce Wayne, making it easily the most emotionally nuanced Bat-movie. It also has one of the greatest Batmobiles ever. (Which, admittedly, is only briefly seen — but it gives us a chance to gush over the car, pictured above in the opening to each animated TV episode.) With a seemingly endless hood, a pushed-back cockpit, and a hint of ears, this is the sleekest and most stylish Batmobile. And yet that style, which is rooted in a kind of Silver Age art deco retro-futurism that defined the animated series, doesn’t make it seem weak or flimsy. Instead, the aesthetic makes the car look like it was carved from a single, impenetrable slab of granite. All hail this animated Batmobile.

Christopher Nolan’s Dark Knight trilogy attempted to give Bruce Wayne and his Batman persona a real-world explanation. When it came to the Batmobile, the director imagined it as a next-generation vehicle that could be sold to the army for use in combat and as an engineering device. But it was so sophisticated (and, undoubtedly, expensive) that it sat in the Wayne corporate vault. That’s where Bruce happens upon the four-wheeled oddity. He paints it black and it becomes the new Batmobile. (Or, in the film's timeline, the first Batmobile.) Technically dubbed "The Tumbler," it had a standout moment in BATMAN BEGINS as it careened over rooftops. In THE DARK KNIGHT, the design was taken even further to incorporate a Bat-bike that is basically a combination of escape pod and swift racer. That made the Tumbler several vehicles in one — and Nolan's team built them all to actually work on the street.

Tim Burton’s first two Batman films were unlike anything anybody had ever seen, especially given the fact that most audiences at the time only knew Batman from the '60s TV show and movie. The Batmobile in the first BATMAN really left a mark; you could imagine Michael Keaton’s character actually driving it around the German Expressionist streets of Burton's Gotham City. It was multi-purpose and seemingly indestructible, with a bullet-nosed front end and stylized wings on the back. Ahe apex of the design came in the sequel, BATMAN RETURNS, leading to a showstopping sequence where the Penguin gets control of the Batmobile. It's one of the more out-of-control moments in all of Bat-filmmaking. But the thing that pushes it over the top and makes it our favorite Batmobile on screen is the moment when, at the end of that Penguin sequence, Batman sheds large sections of the Batmobile, revealing a rocket-like Bat-pod that he uses to escape down an alleyway. This inspired the Bat-bike from THE DARK KNIGHT, our second favorite Batmobile, and was generally amazing. Imagine what Burton would have dreamed up if he had been able to make another Batman movie. (Note: Pictured above is the 1989 movie design, because there are few clear, high-resolution images of the 1992 version.)

Want to know more about THE BATMAN?