Jungle Cruise: Everything You Need to Know

Pack your bags because we’re going on a JUNGLE CRUISE! Next summer, Dwayne Johnson and Emily Blunt will embark upon a wild adventure inspired by one of Disney’s most iconic theme park attractions.

JUNGLE CRUISE brings the ride to life with a thrilling story that sends the two stars on an epic journey filled with laughs and excitement that are suitable for the whole family. Here’s everything you need to know about Disney’s next big live-action adventure.

Check Out the Jungle Cruise Trailer


Adventure! Action! Excitement! Good jokes! The JUNGLE CRUISE trailer has it all. Set in the early 20th century, the story follows a scientist named Lily Houghton (Emily Blunt) and her brother McGregor (Jack Whitefall) as they enlist the help of a riverboat captain named Frank (Dwayne Johnson) to help them find the fabled Tree of Life, which is said to possess miraculous healing powers.

Although Frank appears to be the adventurous sort, he spends his days manufacturing thrills for the customers on his riverboat. When Lily shows up at his office, she basically forces Frank to put his money where his mouth is and prove his skills as a real-deal riverboat captain. With no way out, he takes Lily and McGregor on a dangerous journey through the jungle. Along the way, they’ll contend with wild animals and try to beat a competing group of explorers to the tree.

From Theme Park to Theatre 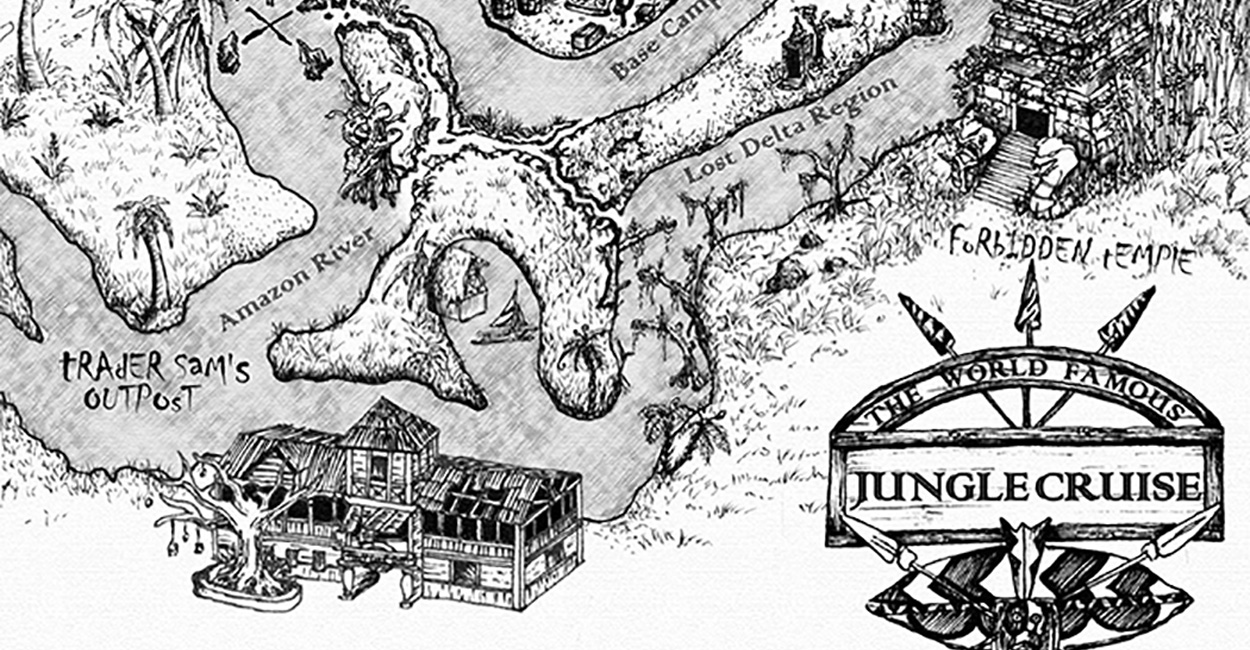 The writers of JUNGLE CRUISE, perhaps following the lead of PIRATES OF THE CARIBBEAN, transformed a theme park attraction into a cinematic event. The Jungle Cruise ride is featured at several Disney parks, including Disneyland in California and the Magic Kingdom in Florida. Visitors board a 1930s-style riverboat, which winds its way through environments that resemble the rivers of Asia, Africa, and South America.

Throughout the "journey," a Disney cast member, dressed as a riverboat captain, narrates the exciting sights and sounds, punctuating the monologue with groan-inducing puns. ("He could develop a crush on you," the captain might deadpan while sailing past a giant animatronic anaconda.)

The simple setup works like gangbusters as a ride, but, as with Pirates of the Caribbean, there’s not a whole lot of story. (The Pirates ride actually has more story!) Much of what you see in the trailer was invented specifically for the movie, including the characters and the race to the Tree of Life. JUNGLE CRUISE certainly retains the adventurous and humorous spirit of the theme park attraction that inspired it.

Who’s Who on the Jungle Cruise

Dwayne Johnson leaves the jungle of JUMANJI for a different kind of jungle in JUNGLE CRUISE. The WWE megastar and blockbuster leading man isn’t playing the typical hero in the new Disney movie. He’s definitely got skills, but he lives a pretty unadventurous life, making him almost a sidekick to the real action star of JUNGLE CRUISE: Emily Blunt.

Her role here echoes Blunt's amazing work in EDGE OF TOMORROW, where she had a similar dynamic with Tom Cruise, another actor best known for his blockbuster action roles. Playing Lily’s brother, McGregor, is English actor and comedian Jack Whitehall, who recently starred in the Amazon original series “Good Omens,” and also appeared in Disney’s THE NUTCRACKER AND THE FOUR REALMS. Paul Giamatti, who previously worked with Johnson in the epic earthquake movie SAN ANDREAS, also stars as a river harbor master.


It wouldn’t be a proper Disney adventure without some great villains. Our charming leads will square off against a pair of equally charismatic baddies, played by Edgar Ramirez and Jesse Plemons. Both actors have experience playing troubled characters: Ramirez, known for his roles in movies like JOY and BRIGHT, earned accolades for his portrayal of late fashion designer Gianni Versace in the second season of “American Crime Story,” and for bringing Venezuelan revolutionary and terrorist Ilich Ramírez Sánchez to life in the extraordinary CARLOS.

And Plemons, after breaking out as the good-natured Landry on "Friday Night Lights," spent his career playing more challenging (and often villainous) characters in dark TV series like "Fargo," "Black Mirror," and "Breaking Bad." But Plemons still knows how to make audiences smile, as he did in the hilarious 2018 comedy GAME NIGHT, pictured above.

The JUNGLE CRUISE begins on July 24!